Chased by a marsh crocodile

This incident occurred at the start of my career.

The Wilpattu National Park was divided into eight divisions. I had started as a Third Grade Ranger in one of those divisions, called ‘Pomparippuwa’. In those days we were not assigned vehicles for field work by the Sri Lankan government. We were left with the choices of cycling or walking.

Anyways, an old paddy field was located at the pathway whichrendered it virtually impossible for a vehicle to cross over it. In addition, this pathway also composed of a sandy area of about 20 square kilometers which caused any vehicle to sink into the earth.

Normally, when we conduct a raid, the suspects will have to be brought before the court. In those days, we could only obtain a vehicle from the main entrance at Wilpattu National Park to transfer any suspects before the court.Thereafter, we had to walk when called upon the day of the hearing to the court on foot.

A 46-kilometer distance separated the Pomparippu area, where Iwas assigned, to the entrance of the Wilpaththu National Park. We walked this distance every morning the day we were to be present at court. We only carried a backpack with documents and other necessities. We would stop for a quick rest and refresh at the Thalawila bungalow, located 7 kilometers from Pomparippuwa, before embarking on the remaining 39-kilometre walk to the entrance at Wilpattu, whose area was known as ‘Hunuwilagama’.

A “Kokariya Wila’ (water tank) was located along the path after passing the Thalawila bungalow. This tank consisted of brackish water. The road in this area was particularly sandy, which resulted in your legs sinking into the ground.

One such morning, I embarked on the journey to present myself at court. At around 6:00 am I found myself at the Kokariya Wila. The day had barely begun to break and all I had in my possession were a few ‘thunder flashes’ used to intimidate and chase away wild elephants. All around me, there was not a soul in sight.

I barely noticed the huge Marsh Crocodile basking nearby.When I passed, the enormous reptile, around fifteen meters in length,jumped awake and charged at me.I was fortunate enough to barely avoid itsclosing jaws. I forced my legs to run as fast as possible on the sinking path,I looked around to see this ferocious beast still chasing me which filled me with even more terror. With all the energy I could muster, I was able to put some distance between me and the fearsome predator. Looking back, I reckon this enormous crocodile chased me for more that eighteen meters.

Ever since, whenever I found myself on that path, I always kept an ever-wary eye for any crocodiles. 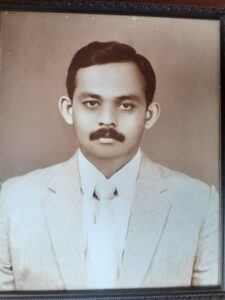 Vehan Sanjith Weragama joined the Department of Wildlife Conservation on November 1981, as a 3rd Grade Ranger when he was less than 20 years of age.  After passing his first and second efficiency barrier exams, today, he serves as an Assistant Secretary of the Anuradhapura Division. His loving family consists of his wife, daughter and son. They reside in at Galagedara in Kandy, whereas Mr. Weragama conducts his duties while staying in the Anuradhapura quarters.

Kahalle Pallekele Sanctuary is spread over the Kalagam Palata, Pala gala and Kekirawa Divisional Secretariat Divisions in the Anuradhapura District of the North Central Province and the Galgamuwa and Polpithigama Divisional Secretariat Divisions of the Kurunegala District in the North Western Province. The boundary of the Matale District of the Central Province is located in the south east direction of this sanctuary.

The total land area is 216.9 square kilometers or 26690 hectares, which was declared on 1stJuly, 1980. Due to its location, settlements are located around the sanctuary and HakwatunaOya and Siyambalangamuwa Lake are also located in this vicinity. The road from Ibbangamuwa to Moragollagama via Polpithigama and the road from Galewela to Negama are the main access roads to the sanctuary. There are a number of by roads connecting Madatugama and Kekirawa via Kala Wewa are located in associate with this sanctuary.

The sanctuary was established in the vicinity of Hakwatuna Oya, Kala Wewa and Balalu Oya with the aim of providing habitat to wildlife including wild elephants that have lost their habitats due to agricultural activities, settlements and development activities in the area under the Mahaweli‘H’ Zone.

Kahalle Pallekele Sanctuary is rich in biodiversity in terms of its size. Public lands as well as private lands may be located in a sanctuary declared under the Fauna and Flora Ordinance. However, if any construction or development work is to be carried out on such private lands, the approval of the Director General of the Department of Wildlife should be obtained.

There are about 50 villages in the Kahalle Pallekele Sanctuary and many villages around the sanctuary boundary. All these villages existed before the declaration of the sanctuary. These ancient villages are located in the vicinity of small lakes and home gardens such as coconut, banana and fruit are also cultivated here. The Ritigala reserve is also located close to this sanctuary.

There are four main streams in the Kahale Pallekele Sanctuary. Moragolla Oya flows into Kala Wewa from the eastern slope of Kahalla. Hakwatuna Oya flows from the southern slope and Mee Oya flows from the western slope of Pallekele. The main source of water here is Siyambalangama Oya. In addition, many tanks such as Balalu Wewa, Bogahapattuwa Wewa, Adiyagala Wewa, Divul Wewa, Ulpath Wewa, Rambewa Wewa and Millagoda Wewa have been constructed for agricultural purposes.

Many species of mammals, fish, reptiles, amphibians, birds, butterflies, insects and mollusks are found here. Elephants, bears, black monkeys, leopards mouse deer, loris and pangolin are endangered species. Deer, sambur, wild buffalo, fox, toddy cat, mongoose, porcupine and giant squirrel are some of the other species that live here. The Kahalle Pallekele Sanctuary is home to 150-200 elephants and about 10 tuskers. Abandoned chenas, tanks and teak plantations are the favorite habitats of the elephants. During the day, elephants roam freely in the shade of trees in the bush. In the evening they come to the grasslands in the lakes and meet the water requirement from the lakes. The grasslands as well as the teak plantations provide them with excellent food. 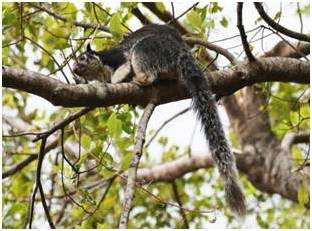 The sanctuary is home to a large herd of deer and several herds of sambur. They can be found in the lower layer forest as well as in the upper layer forest. Seven or eight leopards as well as several bears live here. About 427 species of birds are recorded in Sri Lanka, of which about 189 are migratory birds. There are about 236 species of migratory birds living in Sri Lanka, 34 of which are endemic to Sri Lanka. Many native as well as migratory birds can be identified in the Kahalle Pallekele Sanctuary. Many of these bird species can be found in the primary forests. Chena lands, scrublands, wetlands and reservoirs are their habitats. 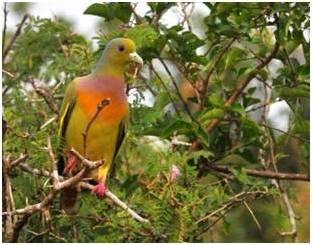 About 165 species of reptiles are recorded in Sri Lanka, of which about 75 are endemic. Many species of reptiles can be seen in the Kahalle Pallekele Sanctuary and many endemic species are endangered. Among 45% of all species endemic to Sri Lanka are reptiles. Star tortoises, lizard species as well as water monitor, iguana, crocodile as well as gecko species can be seen here. There are also many species of snakes such as sand viper, python and cobra.

Kahalle Pallekele Sanctuary is a very important sanctuary located between the North Western and North Central Provinces. The sanctuary is home to a wide variety of species, including elephants, and consist of a number of wildlife-friendly ecosystems.

The main threat to the sanctuary is the use of the land for agriculture. Clearing of the forest by the settlers pose a threat to wildlife habitats as well as exacerbate the human-elephant conflict. Cattleare being sent to sanctuary, leaving elephants and other wildlife facing food shortages. Also, although poaching in the sanctuary is prohibited under the Fauna and Flora Protection Ordinance, poaching is still practiced here at least occasionally. There are many medicinal plants in this sanctuary. Among them are Sandalwood, Aralu, Bulu, Mee, Olinda, Elabatu, Elanedun, Wadakaha, Rasakida, Kohomba, Aloe vera, Adathoda, KapuKinissa, Venivel, Watake and Walkaduru. Unauthorized activities such as sand mining, felling of trees for firewood, etc., cause damage to the natural resources of the sanctuary and their depletion. Attempts to use the sanctuary for various development activities and attempts to encroach on the sanctuary are another threat to the sanctuary. 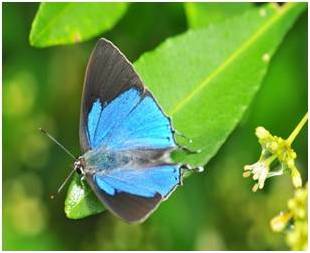 Unlike National Parks, there are no provisions in the Fauna and Flora Protection Ordinance for tourism in the sanctuaries. A sanctuary is a place where wildlife habitats are protected. Doing anything that could harm wildlife habitats in a sanctuary, destroying nests, destroying chicks and eggs, and killing animals is strictly prohibited.