TERROR AT THE PARK

This incident I am about to tell you occurredon the 15th of October 2007. I waseleven years into my career, having started out in 1996 as a Wildlife Guide, and now a Second-GradeRanger stationed atthe ‘Palatupana’ center atYala National Park.

Every year, it is conventional practice to close Yala National Park to the public from the 1st of September to the 15th of October due to the drought season. Yet, officials are kept busy with themaintenance of ponds and roads, renovations and refurbishments of the several tourist bungalows situated in the park and conducting raids for poachers and other no-do-wells.

Since the park was to be reopened to the public the following day, we left Palatupanacenter to restock the tourist bungalows. We set out on a ‘Land Rover Defender’, numbered 57-1462, as a small posse of five, consisting of Ranger Mr. AsankaGunawardana, Wildlife Guard Mr. MahendraGamage, Finance Assistant Mr. B. M. J. Lakmal, Driver Mr. H. A. P. Chandana, and myself.

As soon as we turned the vehicle around to flee, we were peppered with a barrage of gunfire, followed by indistinguishable shouting from both us and our attackers. As myeyes adjusted to the creeping darkness around the thick forest, I was able to determine the obscure outlines of about 10 –12 militants. Fortunately, we were able to reach the center office despite the gunfire. We got out of the Rover to find 13 bullet holes in the vehicle, but every one of us was alive and had managed to escape without any serious bodily harm.

Our relief in escaping a sure death was soured as we received information of the militants having murdered eight soldiers. They had also burned down the keeper’s house of the ‘Thalmasgankada’ bungalow, but both the keeper, Mr. K. L. Chandrasiri and assistant keeper, Mr. JagathThemiyapala, had managed to escapeby hiding in the dense, dark forest.

We counted our blessings for surviving this traumatic episode,but this attack was one of several the LTTE had executed in the Yala National Park over the years, until the end of the nearly 30-yearlong, brutal civil war in May 2009.

As the war reached itslong-awaited end, I transferred to the legal section of the Colombo head office at the beginning of 2009.To this day, I still count my blessings, forit is nothing short of a miracle that I survived. 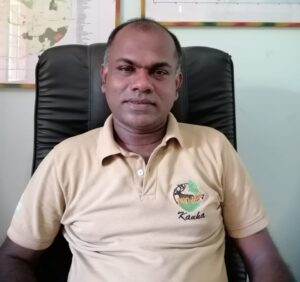 Mr.Dilip Dilantha Samaranayake is currently working as the Park Warden of the Kumana National Park. He has worked in various National Parks in Sri Lanka. Yala, Udawalawe, Lunugamvehera, Wasgamuwa, Legal Division of the Head Office, Walawa Left Bank are some of the places where he has worked.

Mr.Dilip Samaranayake is a loving father of two sons, resides at Wellapitiya, Horana.

Renowned as a wildlife paradise, Yala National Park is one of the oldest wildlife sanctuaries in Sri Lanka. Although this park with an extent of 126786 hectares is less in size than Wilpattu Park, it is a land rich in biodiversity. Located in the southeastern part of Sri Lanka, Yala National Park is bounded on the north by the Uva Range, on the east and south by the Indian Ocean, on the West by a tributary of the Menik River and on the Kataragama mountain Range. Yala Sanctuary became a National Park on 25th February 1938 under the Fauna and Flora Protection Ordinance.

This national park is divided into five zones for administrative convenience.

In addition to these 5 sections, the Yala Strict Nature Reserve consists of 28905 hectares.

The months from May to September are dry months, when the animals run out of water and food. During this time, wildlife is in dire need of rest, and during the peak of the drought, September to October period, the park is closed to visitors.The park is generally known for its wet monsoon and dry monsoon forests and thorn bushes. Ecosystems include freshwater and marine wetlands, mangroves, and marine ecosystems such as coral reefs. Located in the lowest plains of the island, some parts of the park are as high as 100 m to 125 m above sea level. The Menik Ganga and KumbukkanOya, the 11th and 12th longest streams in Sri Lanka, also flow through the Yala Park. Several tanks including VilapalaWewa, GonagalaWewa, MandagalaWewa, UraniyaWewa, MahaseelawaWewa, Heenwewa and KorawakkaWewa are found there.

41 species of mammals, 133 species of endemic birds and 27 species of migratory birds have been recorded in the Yala National Park. Wild elephants, wild buffaloes and spotted deer can be easily spotted here. Wildlife is mostly found in the marine areas of the first zone. Zones 1 and 11 of the park are a leopard paradise.

Bears, sambar, mouse deer, small Indian civet, foxes, wild cats, monkeys and palm civets are some of the other animals that can be seen in this park. Close to the ocean star tortoise,lizards such as the oriental garden lizards, common green forest lizards, and near rivers and streams, salt water and marsh crocodiles  can be found.

There is no shortage of water in this forest which has an environment conducive to the occasional nesting of migratory birds. There are about 20 lakes and lagoons avail here for aquatic birds and other animals. From September to March of this year of the following year, the migratory birds lodge in the surrounding and nearby sanctuaries. 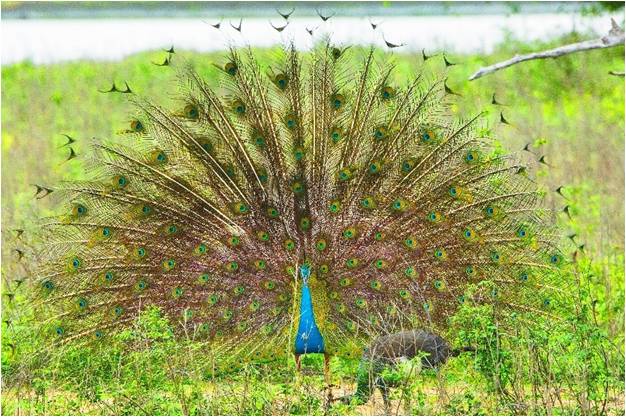 The second zone of the park has the least coverage of forest, but all other zones are covered with forests. The flora of Yala Park includes dry or semi-evergreen or thorny forests, wet deciduous forests, mangroves etc. Palu, Veera, Lunuwarana  are the predominant plants and Ehela, Ranawara, Kohomba and wood apple plants are also widespread. Other species include Andara, Kukuruman, HeenKaramba, Eraminia, Hirasa, KiriVel, Wild Pichcha and Asparagus. About 300 species of plants have been identified in the first zone of the park alone.

It has been established that there were settlements associated with this forest in the past. The Pothana, Palatupana, Helawa, Okanda areas are villages where people lived in the past. Over time, these settlements became forests and became paradise of wildlife. There is a statue of the lord Buddha in a rock cave at the top of the hill belonging to the MagulMahaVihara near Palatupana. There is also evidence that ancient Buddhist shrines were in a very advanced state at that time, according to ancient pottery ruins, Brahmi script, inscriptions, Buddha statues, etc. Inscriptions related to the reign of King DutuGemunu have been found near the SithulPawwa sacred ground. Pimburagala Kanda, Gona Gala, AkashaChaitya, ViharaGodella, SithulPawwaRajamahaVihara where the Arhat monks lived and the rock caves and MagulVihara are still places of worship within the park. There are many historical stories and legends associated with Yala. Meanwhile, the stories related to Andre are very interesting.

Divided for ease of administration, Yala Park has road facilities for tourists to visit. You have to enter Palatupana to watch the first part of Yala. This park is managed by the Park Headquarters located at Palatupana. 9.5 km from Tissamaharama town on the Colombo-Kataragama main road past Kirinda at the Palatupana main entrance is located . It is about 40 km from Kataragama to Katagamuwa, Sithulpawwa to Palatupana via Bambawa. Tourist lodges with all facilities have been constructed for tourists and accommodation should be reserved from the Department of Wildlife Conservation in Colombo. A tourist information center is also located at the entrance of the Yala National Park and a leopard Observation Center has recently been established in the park.