I was first appointed as a 2nd grade Ranger of the “Maduru Oya National Park” in 1998. At the time, the Warden of the Park was Mr. Ranjith Jayasinghe. He was a well experienced person and had undergone a training in South Africa. Excluding me, there were around five more rangers in the Park.

About three months into my service, one morning, I received a call at around 6 am. A ranger called Peter Singhor had arrived at the Head Office to report a dead elephant, lying near the main road.Thereafter, the Warden, Mr. Ranjith got ready to go see the dead elephant. I volunteered to accompany him. Mr. Ranjith, myself and Peter Singhor set out on the long walk to assess the situation. As we drew closer to the scene-of-death, the jungle around us grew thicker and thicker.Finally, we arrived at the spot, from where, not too far away, we saw the dead behemoth,lying beside a large, shady tree.

After a cursory observation, Mr. Ranjith proclaimed the elephant to be at about twenty-five years old, and dead for at least twenty-four hours.As we were observing its swollen belly, Peter stood beside the elephant’s trunk. Not soon after, we got distracted by Peter’s startled voice. Peter had barely yelled “it’s not dead!”, when the great beast stood up at once, as if nothing had happened at all.

All I remember from then on is running for cover, for a wild elephant is a formidable threat with a well-earned, fearsome reputation for wreaking devastating havoc. I waited for the wakened giant to leave, after which, when I was sure it was a safe distance away, I ‘hooted’ to signal my location to the others. In our panic, we had run in three different directions with absolutely no idea where each of us hid. Soon after, we managed to regroup. We were all shaken, but safe.

As it turns out, the elephant had thoroughly gorged itself – enough to gain a large, bloated belly – after sneaking into a paddy field in the nearby village of“Kiniththagama”, before settling down for a long, comfortable nap.

As a novice, nineteen-year-old Ranger, this was the first ‘high-stakes’ encounter under the belt during my time at the Park. I will carry this memory with me for as long as I live. 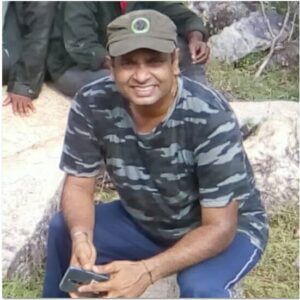 Pubudu Suranga Ratnayake is currently the park ranger of the Wilpattu National Park.He came to Maduruoya National Park on 09.11.1998 with his first appointment as a Second Grade Officer of Wildlife Conservation and has served in Wasgamuwa, Udawalawe, Kumana, Yala and Wilpattu National Parks and Victoria, Randenigala, Rantambe Headquarters.

He passed the GCE Advanced Level (Science)Examination with a Distinction and passed a competitive examination and entered the Department of Wildlife Conservation.Currently, Mr. Suranga Ratnayake has undergone training in wildlife management in India and has also trained in countries such as Indonesia, Malaysia and the Philippines.

Suranga Ratnayake is currently the father of a beloved daughter and lives in Biyagama, Kaduwela.

If the purpose of the Maduru Oya National Park is further clarified, the purpose of this national park is to protect local natural resources and ensuring ecological processes, to ensure the quality of water in the park and the size of the reservoirs, to create eco-tourism opportunities and to benefit the local communities.

Maduru Oya National Park is located in the Badulla District as well as in the Ampara and Polonnaruwa Districts of the Dry Zone. It is fed by the Northeastern monsoon in October-February and the Southeastern monsoon in March-May, the average rainfall is about 2000 mm and average temperature is 27 degrees Celsius.The main feature of this landscape is the 8 km (5.0 miles) rocky outcrops to the Southwest of the park. Red soil is predominant and does not spread evenly throughout the park and the organic matter content of the soil dries out very quickly. The hot water spring in the Kivlaella area is a famous tourist attraction.

Maduru Oya is made up of a complex of natural and human interactive ecosystems and it is imperative to allocate such a large area to small units or zones. Each of them varies according to its administration, management and usage. Permitted human activities may vary significantly from one region to another. For ease of administration, MaduruOya is divided into the following management zones. They are

5) and the induction zone.

According to folklore and ancient chronicles, the area has been known as a forest reserve since ancient times. According to the Mahavamsa, Maduru Oya received attention from King Mahasen in 273 AD and King Vijayabahu I, who ruled from 1055 AD to 1110 AD.Formerly known as Mahadaragalla, this area was later renamed as Maduru Oya to suit the Hela language.

The predominant ecosystem in the area is tropical dry mixed evergreen forests. Maduru Oya, far away from the Mahaweli, can be described as a forest of unparalleled beauty. There are a number of woody plants around the reservoir. Dry zone forests are dominated by Weera, Palu, satin, Velan. However, in the forest near river basins, Kumbuk, Thimbiri, Mee, whilekithul, na, etc. and Secondary Forest with shrubs as well as grasslands can also be seen closer to the Unukirigala where wet-dry features exist.

Maduru Oya National Park has a wide variety of animals in the dry zone, from the majestic elephant population to the tiny ant. The Unukirigala forest in Maduru Oya Park is a good habitat for the Red-faced malkoha, which is known as a very rare bird endemic to Sri Lanka.

Due to the constant movement of wild elephants between the two Banyon trees in the area and scratching of body of the elephants using a large number of hanging roots, they are lining up like teeth of a giant comb.

The easiest and most practical route from Colombo is viaKurunegala, Dambulla, Habarana, Polonnaruwa and Manampitiya. This national park can be reached via Polonnaruwa – Batticaloa road and Mahiyanganaya – Padiyathalawa road.

Maduru Oya National Park, a national park that is easily accessible to visitors to Ampara, Badulla and Polonnaruwa, this area is also witnessing increase in planned colonization.This has become a significant nuisance to wildlife in the park. There are two bungalows and one hostel in Edaru Atamulla in front of Maduru Oya Reservoir. For nature lovers, the Ulhitiya camp site is accessible and there is also a well-maintained wildlife museum at the entrance to the park.