The incident I am about to tell you happened in 2004, just two years after my recruitment and second placement as Game Guard at Bundala National Park.

To get familiar withBundala National Park,one must know that it is situated adjoining the Wilma Sanctuaryand is smaller than its peers across the country. Despite its size, it functions as the perfect petri dish of a rich and diverse habitat, allowing the avid onlookeraperfect opportunity to observe both fauna and flora thriving in its natural splendor. An example would be the annual visitation of migratory birds and the most welcome arrival of five species of sea turtle known to grace its bordering shoreline. It is realized soon enough by any wildlife enthusiast who visits Bundala, that those who work here possess an unparalleledfamiliarityof all animal and plant species in the Park’sdomain and a thorough understanding ofthe laws pertaining to their conservation.

Regrettably, the Park’s lusteris not without its downsides. Although poaching is a rare occurrence in Bundala, there are occasions where it has been known to happen, so although it wasunexpected, it did not come as acomplete surprise when we received information of an infamous poacher, known for being aggressive with officers, being in the area. We planned on a raid to apprehend the perpetrator and end his days of poaching once and for all.

So, on a fine humid night, we –Ranger ChamathLakshman, WildlifeGuardsNihalRathnapala and Y.D. Karunarathne, Assistant Wildlife Guard M. Karunarathne and I – started heading back after keepingwatch for several hours beside the Bundala lagoon, when a gunshot pierced the tranquil silence and its echo reverberated throughout the forest. We followed the noise to its source and found ourselves near the bordering Wilma Sanctuary.

The low, familiar rumbling which follows the ignition of a tractor caught our attention in the pitch dark, heavily dense forest. We followed the noise and soon enough, were able to make out two beams of light emanating from what was an advancing tractor, steadily approaching our direction.I could only make out Assistant Wildlife Guard Karunarathneand was unable toidentify the whereabouts of the rest of our small group, but I did see the light illuminate a well-built man, armed with a hunting rifle,making his way toward the driver.

With what precious little time we had left, we did not have the luxury of deciding on a proper strategy. I somehow managed to gesticulate toKarunarathne,that the two of us should circle around to the tractor’s rear, thinking it would be easier to intimidate the poachers if we gave the impression that they were surrounded. Karunarathne and I wereseveral steps along on our way when we were distracted by sudden shouting. The rest of our group – who had been hiding closer to the suspect, had jumped on the armed man, and were attempting to wrestle the hunting rifle away from him. Almost immediately, the ruckus was interrupted by the sound of another gunshot.

I made my way towards the commotion to see the poacher lay sprawled on the ground, blood gushing out of what appeared to behis ear. It was undoubtedlya grave injury.We fumbled around trying to stop the bleeding by applying pressure on the wound.Without wasting much time, we managed to load the incapacitated poacher and his now apprehended accomplice into our vehicle.As everyone seemed to be able to move without difficulty, we felt relieved with the realization that none of us had suffered any serious injuries.

I remember the rest of the group setting out to take the apprehended driver to the Wildlife office while Ranger ChamathLakshman and I took the incapacitatedsuspect to the hospital,a few minutes after being admitted, the hospital notified us that the person had succumbed to his injuries.

After we gave our statements to the Hambantota Police, the Magistrate ordered a formal inquiry to be conducted at the place where the unfortunate incident took place. Through the inquiry, we came to know that the dead suspect was a member of a gang, which had drawn the ire of law enforcement multiple times. For about two days, we were the recipient of unsavory phone calls, no doubt a poor attempt to intimidate us to make up for the gang’s loss and wounded pride.Nevertheless, nothing they said or could have said for that matter, could impede us in doing our duty.

On a happier note, this incident was the precursor to a much more amiable relationship between wildlife officials and law enforcement. Wildlife officers could be sure to receive any information which might require their attention much quicker than before with little bureaucracy. On an even happier note, since this incident, there have been no occurrences of poaching in Bundala National Park.

Mr. M. Ratnasiri Perera is currently working as a Wildlife Ranger at the Haggala Beat Office. He joined service as a wildlife ranger in 2000 and was promoted to Site Assistant and later to Wildlife Ranger.

Ratnasiri Perera is an experienced wildlife officer who completed the Diploma in Wildlife Management at the University of Colombo in 2017 and was received the Sarath Kotagama Best Field Performance Award which is present to honour Prof. Sarath Kotagama. At present a successful program is being implemented by him to find solutions to save the leopard from the recent threats faced by the mountain leopard. Mr. Ratnasiri Perera leads a successful marriage with his wife and sons. His wife works at the Millaniya Pradeshiya Sabha and their only son is a third-year undergraduate in Physics at the University of Colombo. He lives in Horana.

He has also completed all the relevant management courses. He also won the Outstanding Wildlife Merit Award in the year 2001, presented by the Department of Wildlife.

The Bundala Wildlife Sanctuary which had been December 5, 1969 was declared as a National Park on 04th January 1993 with the primary objective of protecting the Bundala and its adjoining lagoon system, one of the last habitats of the Indo-Asian bird migration route. Located in the Southeastern arid region of Sri Lanka, the Koholankala, Malala, Embiligala and Bundala shallow lagoon wetlands are home to a wide variety of bird species and migratory birds. For this reason, the Bundala Wetlands were declared the first International Ramsar Wetlands in Sri Lanka, on October 15, 1990, under the Ramsar International Convention is especially important for migratory aquatic birds. Covering an area of ​​6216 hectares, although this National Park is a small National Park compared to other national parks it has many specialties. 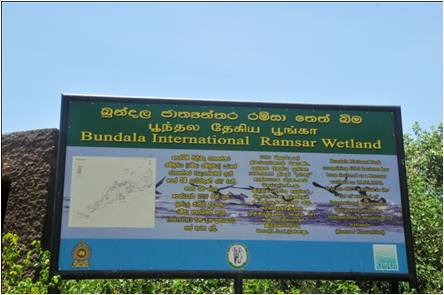 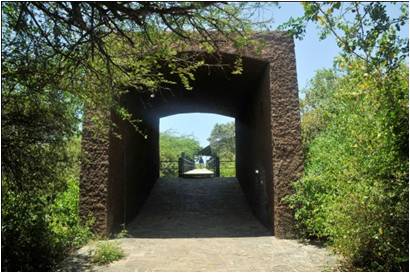 Entrance of the Bundala National Park

The Pathiraja area in the park has been identified as an archeologically important site due to the discovery of fossil evidence of a prehistoric human. The unique gravel and soil layers found in the Pathiraja area have been confirmed to be between 74,000 and 64,000 years old. According to Carbon 14 dating, these gravel layers have been identified as belonging to a composition called Iranamadu in the Tertiary Age. Archaeologists have unearthed evidence of human habitation in the area during the Stone Age, according to micro-tools found among the gravel layers. Furthermore, the discovery of semicircular and triangular stone tools in the sand dunes of the Bundala area has revealed many important facts about the history of human habitation of the island. Bundala National Park has been declared a Man and Biosphere Reserve by the United Nations Educational, Scientific and Cultural Organization (UNESCO).

Bundala National Park is located in the Magampattu area of ​​the Hambantota District. In the lowland arid zone, the annual rainfall is 107.4 mm and the average temperature is around 27oC. But April, May, and June are the hottest months of the year, with dry months from February to September.

About 1/3 rdof the park is surrounded by submerged main lagoons. In addition, it consists of salt marshes, sand dunes, mangroves and grasslands. The main ecological zones in the park are shrublands with thorny bushes and lagoons. In addition to these ecosystems, other ecosystems found here include tropical deciduous forests, predominantly with Ceylon green wood, sand dunes vegetation communities, coastal vegetation communities, coastal grasslands, riverine forests, shrublands with mesquite trees, salty marshes, mangroves and seasonally flooded lakes and ponds. You can see riverine forests on both sides of the Kirindi Oya which falls into the sea from the Southern boundary of the park.

The Asian elephant plays an important role in the consideration of species. There are between 10-15 permanent resident elephants and 25-50 migratory elephant groups that visit the park from time to time throughout the year.

Five of the seven species of turtles a kind of reptiles living in the world have been recorded off the Bundala coast. A special turtle conservation project is also underway at the Bundala National Park to protect the eggs and juveniles of these sea turtle species; Green, Olive Ridley, Leather backed, Logger head and Hawks bill. The number of fish recorded in the Bundala National Park is 32 and there are 52 species of butterflies have also been recorded.

These lagoons and associated swamps are ideal feeding grounds and habitats for aquatic birds. Birds are native to the park, especially the Sri Lankan jungle fowl, Painted stork, Blue-faced malkoha and  Spot-billed pelican. 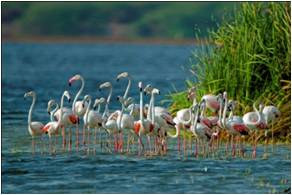 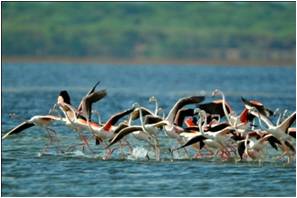 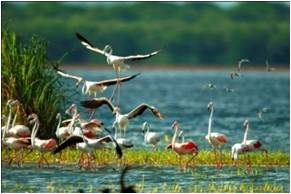 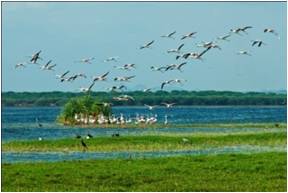 Beauty of the Greater flamingos

Greater flamingo and Black tailed godwit are some of the migratory birds that visit the park. Once a paradise for the Greater flamingo, the area has been affected by a shortage of food due to freshwater intrusion into the lagoon caused by current human activities.

You may reach the park headquarters 256 km from Colombo via Galle, Tangalle on the Kataragama road, turn right at Weligatta junction and move 1.6 km from there. In addition, you can reach Bundala National Park within distance of 245 km on the Colombo-Ratnapura Road via Nonagama junction of Embilipitiya of Kataragama road.

Bundala National Park has a tourist center and a souvenir shop and a special bird watching pavilion built for bird watching. Bungalow facilities are not available but there are several campgrounds. 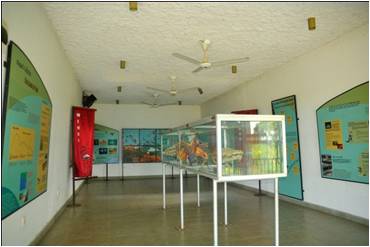