I joined the Department of Wildlife Conservation in 1999. After working in Horton Plains for a short period I was transferred to Lunugamvehera National Park on duty in the year 2002. At that time, I did not have much experience in official duties.

As the Wildlife Officers our role is to help the animals meet their food, water and salt needs. We worked to meet the salt needs of these elephants. Pits were dug and salt was brought from the Hambantotasaltern and filled to make salt deposits. This one hole is usually 4 feet x 4 feet 4 x 4 feet. It should be monitored to see if Elephants can benefit from salt deposits. We always vigilant on that.

One day I was traveling with our group on a patrol in Bolhindagala area. Lunugamvehera National Park is accessed also from the site of the Thanamalwila Black Bridge. On my way back to the office after patrolling that day, I wanted to see some salt deposits nearby. I asked to stop the vehicle and went down to the salt deposits.

This salt deposit was located about 20 feet [20 m] from where I was staying. First there is an area like a lawn with occasional trees. Next is the salt deposit. And then the jungle starts.

I checked to see if the salt had eaten by the animals. There was elephant dung. It was obvious that the elephants had used salt deposits. I was closely observing the salt deposits.

Suddenly I heard a noise and I saw a big elephant behind me. I looked that way because of its sound. The distance between the two of us is about 5 feet. I couldn’t utter a word even due to fear of death. The next moment I turned around and ran as fast as a robot. My legs felt amazing strength; I ran fast towards the place where the vehicle was parked. I felt the elephant coming closer and closer behind me.

Our team opened the door of the vehicle and shouted at the elephant. At that sound the elephant’s harshness subsided. I was able to get in the car. At the same time we drove the vehicle fast.

That day I learned that when going to the forest, one should go with a good understanding of animals. That incident was the best experience in my life.

I still remember that fear of life. 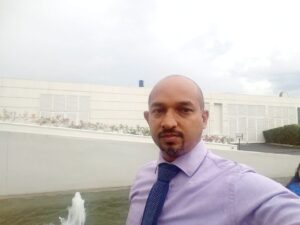 During his 22 years of service, he has worked in the Horton Plains and Wilpattu National Parks, Muthurajawela, Victoria, Randenigala, Rantambe Sanctuaries and is currently the Park Warden of Angammedilla National Park.

Mr. Uduporuwa has completed the Diploma in Wildlife Management offered by the Department of Wildlife Conservation for site guards.

Mr. Uduporuwa’s loving wife is a teacher and they live in Mawanella area.

According to the provincial nomenclature of our country,Lunugamvehera National Park, a precious forest area, which is located in the Uva Province is unique for its biodiversity. It extends Thanamalwila, Wellawaya, Kataragama and Buttala Divisional Secretariats in the Moneragala District and Lunugamvehera in the Hambantota Divisional Secretariat. This National Park is an important habitat for birds and elephants. Also functioning as a corridor for migrating elephants from Yala to Udawalawe National Park, it was established on 08th December 1995 as the Lunugamvehera National Park with an area of ​​23,498 hectares for the protection of wild elephants.

Lunugamvehera National Park is located 261 km southwest of Colombo whilst located in the dry zone of Sri Lanka and is a park exposed to the annual drought. The elevation of the park is 91 meters (299 feet).Lunugamvehera Reservoir occupies a significant area of ​​the park, covering 14 percent of the total land area, or 3283 hectares. The average annual temperature of Lunugamvehera is 30 C (86 F) and thus the total dry area of ​​the park is 20,156.8 hectares. It is abundant of soft, wrinkle-free, plains and rocky outcrops, this arid zone garden is prone to annual droughts.

The significance of history is evident with the presence of the NilgiriDagoba and the remains of a ruined temple. Also nearby is the MagulMahaVihara which is considered to be the place where Goddess Viharamaha got married. You can still see the ruins of a magulporuwa built inside the temple and the only moon stone ever found in Asia with four mahouts.

The area is home to a wide range of fauna, from small ants to large land elephants. It is home to 21 species of fish, 12 species of amphibians, 33 species of reptiles, 183 species of birds and 43 species of mammals. The park is rich in biodiversity whilst it is home for Asian elephant (Elephas maximus), Water buffalo (Bubalus bubalis) Wild Boar (Sus scrofa), Common Mongoose (Herpestes edwardsi), Giant squirrel (Ratufa macroura), Sloth bear (Ursus ursinus), Common agamid Lizard (Calotes versicolor), Red lipped lizard (Calotes ceylonensis), Star tortoise (Testudo elegans), Python (Python molurus). It is a favorable habitat for a large number of animals. Elephants are often seen roaming in the Lahugala electorate due to the presence of Beru grass, one of their favorite foods. This area is also known as the Elephant Food Store.