Among the happy memories

I came to Udawalawe Elephant Sanctuary in 1999. Prior to that, I had the experience of working in the Elephant Transit Home from time to time for acting the service of Dr. Vijitha, the former Veterinary Surgeon in charge when he was on leave. There is a scientific opinion that wild elephants and humans cannot live together. But because we are a human race that has been with the environment since ancient times, elephants and humans live together at the Elephant Transit Home.

I was much enthusiastic to work in the Elephants Transit Home. Conserving elephants is not an easy task with the growing population of a small island like ours. What usually happens is that when the human-elephant conflict escalates, the elephants are chased away and driven back into the wild or anesthetized and put into the wild. Doing so can sometimes cause the calves to get lost. The Udawalawe Elephant Sanctuary was established in 1995 to properly conserve these baby elephants.

In 1997 there was an operation to drive elephants from Handapanagala to Yala National Park. At the end of the operation, a village buffalo herdsman called Madda had informed Wildlife Guard L. B Anura about a female baby elephant with his herd of buffaloes. Accordingly, Wildlife Assistant Conservation Mr. Mansoor, and Wildlife Guards, Mr. L.B Anura and Mr. KarunasenaSamaranayake, and the Driver Mr. Kamal Jasmine went there and put the baby elephant in a DWC jeep and brought it to the elephant shelter. She is nicknamed ‘Sandamali’ as she is found in Handapanagala.

I first met the group of elephants including Sandamali when I came to work in the Elephant Sanctuary. Sandamali loves her younger baby elephants very much. She showed genuine affection to those who lost their mothers. It was a common sight to see the youngest baby elephants lying next to Sandamali, licking her earlobes. She was like a mother or an older sister to those calves.

When we go to treat the little ones, the first thing we have to do is drive the Sandamali away. The Sandamali should be driven away to audible distance or if the treated calf feels pain and make trumpet sound, Sandamali will come running. She protests with a “guru guru” tone. She tries to get the baby under her belly. Sandamali was really like the leader of the group and took her team of baby elephants across the Elephant Transit Home tank field with her friend Mattali, the baby elephant.

Elephant calves are released into the wild every few years. In July 2000, the then Director of Wildlife, A.P.A. Gunasekera and Nandana Atapattu, Head of the Veterinary Division, the founder of the Elephant Sanctuary, led the team to release the baby elephants in the Boraluwewa area in Udawalawe. In this group there were baby elephants called Sandamali, Mattali, Komali and Emily and male elephant calves called Isuru. There we put radio collars on Sandamali, Komali and Isuru to make it easy to find them. When released, the baby elephants join other herds. When joining these elephant herds, the leadership qualities of Sandamali and Mattali and the bond between them became clearer.

Often the females in the herds do not like the members coming from outside. We could see that Sandamali would come forward if the cubs in her group were being harassed. Our follow-up continued. We saw the group including Sandamali mixing well with the wild elephants in Udawalawe National Park. Except for Komali, everyone else was in the same group. Three years after the release of the baby elephant group, we removed the radio collars of the elephants. But it was not difficult for us to find them as we had confirmed the location of the Sandamali and the group.

When Sandamali was 13 years old, we saw that she was pregnant. We were curious because of her younger age. But on the morning of a day in April 2008, we saw a group including Sandamali in the teak among mana bushes beyond the teak fence of the Udawalawe National Park.

As we got closer to them, we saw a baby elephant sucking milk from the Sandamali. Her friend Mattali was also nearby. We waited for about 15 minutes until they disappeared in the mana bushes.

That scene excited us. Our cameras were filled with pictures of the group including Sandamali. That was the most satisfying sight I have ever seen during my career in the field of wildlife conservation. 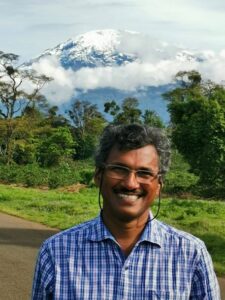 He served as the officer in charge of  Elephant Transit Home, Udawalawefor  almost a decade and has served for the Southern, Eastern and North-Eastern wildlife regions of the country. In year 2004 he attended Wildlife Disease Surveillance and Translocations Programmein Mweka Wildlife College, Tanzania and Kenya.

In 2013 he initiated the rehabilitation proposal for wet zone species and in year 2016 established the Wildlife Rehabilitaion Center, Attidiya with the support of UNDP,SGP and the local NGOs OARM and CES. At present Dr.Jayawardana is the in-charge of Wildlife Rehabilitation Center, Bellanwila-Attidiya Sanctuary which serves the highest number of wildlife casualties in Sri Lanka.

There is a common saying among people that watching Elephants and seeing puppets are never become boring, as elephants are one of the most admired species of wildlife in the country.The Elephant Transit Home  which play a big role as the loving accommodation of helpless elephant calves in this country who have lost their maternal care celebrated its 26th year in 2021.This lovely house was established in the year 1995 and belongs to the Embilipitiya Divisional Secretariat and the UdawalaweGramaNiladhari Division in the Ratnapura District of the Sabaragamuwa Province.It and it is spread over an area of ​​about 200 acres at the Western boundary of the Udawalawe National Park, bordering the Udawalawe Reservoir on the South. It is the only elephant orphanage in Asia. 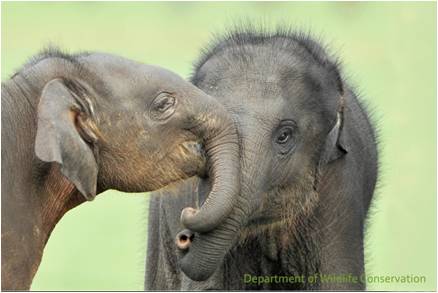 The Pinnawala Elephant Orphanage was established by the Department of Wildlife Conservation in 1975 with the aim of assisting elephants who are subjected to orphaned or injured due to various reasons. But the Department of Wildlife Conservation was adamant that elephants should be given them free life even more. Accordingly, the Elephant Transit Home-(ETH) was established in 1995 as per the concept of then Head of Wildlife Health, Dr.Nandana Atapattu under the theme “Let them return to their homeland”. Administered by the Department of Wildlife Conservation, it is also the first established elephant rehabilitation center in Asia. The primary function of this is to take care of the future of the helpless calves of the elephants that die prematurely due to accidents in parks and beyond, and to release them back into the wild once they have become accustomed to life in the forest.

The ancient tradition of handing over a lost baby elephant to a temple or an aristocratic family changed with the advent of the Elephant Sanctuary. This place which started with a baby elephant named Komali has now become a shelter for many other helpless baby elephants. In 1998, for the first time, baby elephants Anuradha, Anusha, Kandula and Gamini were released into the wild with ‘radio collars’, which were constantly monitored by wildlife officials until they joined the herds. Udawalawe Elephant Sanctuary staff still use radio signals tied around the necks of elephants that have grown up in the shade to learn about their whereabouts and the safety of the elephants.

Starting with the four baby elephants in 1998, more than 100 wild elephants have been released by the year 2020 and currently 40-50 of the helpless baby elephants are being cared for here. The Elephant Intermediate Shelter, a rented elephant sanctuary, is a place that makes a real contribution to the conservation and development of the country’s wild elephant population. We should appreciate the service rendered by continuously providing liquid milk during the day and night and caring for their own children. Today, Udawalawe Elephant Sanctuary has become one of the most successful elephant sanctuaries in the world, striving all day long to care for baby elephants under limited resources.

If you wish to contribute in some way to the noble mission of providing constant care to the baby elephants of this country, quenching their hunger and ensuring their right to life, you too have the opportunity to contribute to the nurturing of the baby elephants, based on the humanitarian virtues of the parent-care system implemented in the Udawalawe Elephant Sanctuary. Your contribution is a strength to this great national task of spending a great deal of money on milk powder perday.

The milk feeding of the baby elephants will begin at 6.00 am and the activities of the cute baby elephants queuing for milk catches everyone’s eye. You can reach the Elephant Transit Home passing 300 meterson C.P.D. De Silva Mawatha on Thanamalwila Road offUdawalawe Junction on Pelmadulla-Embilipitiya Road.

We are all saddened by the pathetic news of orphaned baby elephants, but it is a relief to know that such a place has been established in the country which help these baby elephants to release back to the wild and let them live happily ever after.