We were on the same path

I joined the Department of Wildlife Conservation as a beat officer in 1998. I was transferred to Polonnaruwa in 2006, where Flood Plains National Park is located.

It was a Sunday, when criminal actions like animal hunting are typically committed. Four of us headed in that direction to visit Flood Plain National Park in Manampitiya. Beat Officer Sarath Kumar, Forest Ranger T. Wijesinghe, and Ranger Nimal were with me. We only had a 12-bore gun, three rounds of ammo, and a few elephant shots where I was in charge of the crew.

We received phone call from the office after traveling about a kilometer into the bush that a 12-year-old child had been killed by an elephant in Muslim Colony, a village close to Flood Plain. Thoughts of returning to the workplace crossed our minds, but since the village was closer, we decided to go right away. In situations like this, individuals frequently become irate with wildlife officers. So, we found the phone number of someone we know in the village and talked to them about the situation. He explained to us that in accordance with Muslim traditions, the body should be buried the same day, thus the villagers were getting ready for the funeral. We had faith in that person and there was a feeling that the elephant that killed the child might be nearby. Therefore,  the elephant should be chased. The four of us walked to the Muslim Colony.

According to the person who gave us the phone call, the local people were in funeral rituals, and a lot of people were there. We approached the place and asked where the elephant was. They pointed to a forest block about five hundred meters away. When we went there, the people of the village followed us. Although people were asked not to come with us, they were not  headed.

For a surprise, the elephant stopped about ten meters away from us for the God’s sake. Wijesingha was on the other side with the gun in his hand, waiting to see what he would do. If he shoots again, the elephant will come to us. Wijesingha told us to escape from there and run towards the funeral home.

Even when we moved from there, the elephant did not make even a sound. He was looking down.

After about an hour, the elephant went to the forest. If the elephant came forward that day, we would be finished. If the gun was in the hands of a new person, he would fire a shot. If we shot, the elephant would come forward and hit us. Our lives were saved due to the awareness of Wijesinghe who had the gun in his hand.

The people of the village did not say anything to us after seeing the incident we faced. We also attended the funeral and went back. The boy had gone to collect wood apple in the morning and was attacked by the elephant. I want to say that animals are not like humans. Don’t hold grudges. It seems that even if this animal was hit by a bullet, there was no hatred towards us. Today Wijesinghe is no more with us. 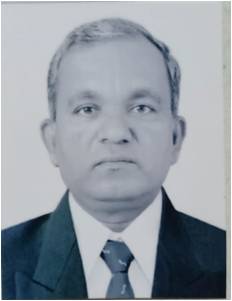 Mr. W.D.M Jayathilaka Wickramasinghe, a science graduate, joined the Wildlife Department as one of the few persons who passed the competitive examination for the post of Beat Officer Grade 1.

Mr. Jayathilaka Wickramasinghe, who started his duties at the Alahera Range where Alahera-Giritale Sanctuary belongs to, performed his duties in areas throughout Sri Lanka such as  Ampara Range, Samanala Range, Polonnaruwa, Maduruoya, Udawalawa, Wilpatttu, Girithale training field, and Colombo head office. He is currently serving as the Assistant Director of Giritale Training Section.

Mr. Jayathilaka Wickramasinghe has completed his BSc Degree from University of Kelaniya, Master’s Degree in Environmental Science from Open University, Entomology Diploma in Plant Protection, Diplomain Geoprocessing offered by the Wildlife Department affiliated to Colombo University. In addition, a diploma in wildlife training has also been obtained in India.

Mrs. Sajeevani Priyanthika, wife of Mr. Jayathilaka Wickramasinghe, works as a Technical Officer in the Kegalle Education Office. The daughter is studying G.E.C. Advanced level at Kegalle Joseph Convent. Their address is Dewalegama.

Flood Plain National Park is located in the Polonnaruwa District of the North Central Province and extends northwards from the northern boundary of the Wasgamuwa National Park. This National Park with an area of ​​17350 hectares  was declared by Gazette No. 309/4 dated 07th August 1984. Flood Plain  National Park is one of the four national parks designated under the Mahaweli River Development Project. The national park plays more than the role of a protected area, acts as an elephant corridor, an eco-conservation area, a special area for lake elephants and a natural wetland system as well. This park is located at a distance of 225 km from Colombo.

The park has a history dating back to the Kingdom of Anuradhapura, and the Mahaweli River is connected to an ancient network of tanks. On the southern bank of the river, at the edge of the Mutugalla lake, remains of an ancient cave ashram with inscriptions dating between the 2nd and 7th centuries BC have been found.

During the rainy season, the wind speed is relatively low and the average rainfall is about 1555 mm. The annual temperature is 32 °C. The Flood Plain Valley is made up of a diverse set of ecological zones consisting of river channels, riparian marshes, lakes, seasonally flooded grasslands and swamp forests. Two rainfall peaks occur in a year, one in April-May and the other in November-December.

It’s always an excellent idea to take a stroll in the park to enjoy the breathtaking views of the Mahaweli River. Wasgamuwa National Park is located on the southern end, while Somavatiya Park is situated next to the northern boundary of the Flood Plain National Park, which acts as an elephant corridor between the two parks. This part of the park includes the most important inland wetland in the country. These wetlands are home to a variety of fish and are important for the survival of birds as well. There are eight important wetlands within the National Park. These wetlands along the Mahaweli River are the only sanctuary in the country for a special species of elephant called the Lake Elephant (Vil Ali). The park plays an important role in the conservation of the lower river basin and riverbanks as it has shallow groundwater even during long dry periods of the year to support a good vegetative cover, provide a unique environment for plant and animal communities, and maintain optimal plant growth in all habitats. As a result of all these factors, the park consists of different ecological zones.

The park is located in the lower basin of the Mahaweli River. About 231 plant species have been identified in the large lakes and swamp forests in the flood plains. The total area of the Flood Plain National Park including small lakes and wetlands is about 2823 hectares. All streams flowing through the park are channels connected to the Mahaweli River. There are many sources of water fed by rainwater.There are five main habitat types, open canopy high forest, open canopy low, medium forest, scrub vegetation, grassland. The dominant tree species in the high canopy layer are Weera (Dryptees sepiaria), Milla (Vitex altissima), Welang (Pterospermum canescens), Panakka (Pleurostylia opposita), kumbuk (Terminalia arjuna). Some species like Ebony (Diospyros ebenum) and Satinwood (Chloroxylon swietenia) are rarely observed in this high canopy layer. Palu (Manilkara hexandra), Divul (Limonia acidissima) plants are among these.

Despite being such a valuable and beautiful place, due to human activities like hunting of animals, illegal entry, illicit logging, illegal removal of non-wood products, sand mining  etc. which are  contrary to the Fauna  and Flora Protection Ordinance, the Flood Plain National Park in Polonnaruwa  is on the verge of destruction. may cause damage to the natural resources in the park and deplete them.

The tourists are allowed to enter the National Park, which is situated in the Polonnaruwa district,  through the Manampitiya – Yakkure junction.

List of animals in the Jala Gelum Nimna National Park

List of trees in the Jala Gelum Nimna National Park

Photography–  pictures are from internet.